Opale has been practicing yoga steadily since 1995.  She discovered Yoga during one of her numerous trips to India.  She became aware of her body seriously lacking of flexibility and muscles.  She had been suffering from chronic lower back ache, sciatic problems as well as excessive stress for several years.  The daily practice of Yoga became the only way to maintain the new painless body.  For 15 years, she travelled the world. She lived in India for a few months each year  and studied different types of yoga : Iyengar Yoga (focused on alignment) for 2 years.  Then Astanga Vinyasa Yoga for 7 years (focus on Udjaih Breath and Bandhas).  Then she moved on to Vinyasa Flow (Power Yoga) for 10 years, in alternance with the study of Vishranta Restorative Yoga.  More recently she now integrates Mindfulness into the Yoga practice.

She also studied Indian philosophy, did a Vipassana Meditation retreat in India, and practiced Pranayama with Emil Wendels.  In India, for many years she studied Astanga Yoga with Rolf Naujokat and then was a student of David Swenson.  In Paris she studied with renown Gerard Arnaud.  More recently she was inspired by Christine May, from the Shiva Rea Prana Yoga.  She has taught in Ibiza since 2005.  She really appreciates the quiet of Ibiza, the peaceful beauty of its nature and its mystical remote places, so propitious for Yoga practice. In the last 7 years she led more than a hundred retreats in Ibiza.
In India, in 2004, she was certified to teach Astanga Yoga after an intense teacher’s training course at the International Purple Valley Yoga Center in Goa, directed by Julie Martin.

In France, in 2005, she was certified to teach Vinyasa and Vishranta Yoga by Gerard Arnaud after a 2 year teacher’s training course at the Federation Francaise de Yoga in Paris.
​
In 2011, she achieved a Pilates Master in Ibiza internationally recognised by PMA.  On request she now integrates Pilates exercises to the Yoga lesson to strengthen the abdominal belt, protect the spine and avoid backaches.  In 2015, she was certified to teach Integrated Yoga & Mindfulness after a teacher’s training course with Hugh Plouton. 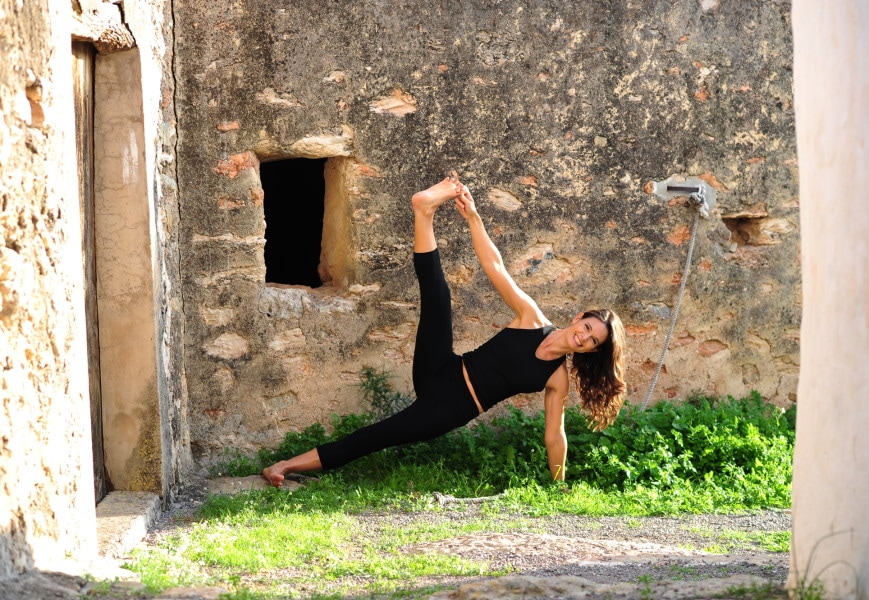